My name is Amy and I am currently suffering from submission fatigue.

I check my email, but not with the same hope and fervor I once did. I scroll through my Twitter feed, but my eyes glaze over as my brain barely registers the agent names that fill it. That tweet that 3 weeks ago was definitely about my manuscript is soooooo not about my manuscript. I think about sending a few emails, trying to get a status update on the submissions I’ve had out for months, but I come up with 27 reasons not to. A writing friend asks me, “What’s new in your writing world?” and my heart sinks. My mind spins as I try to come up with something more positive than the absolute despair I feel about my writing career in this moment.

I’ve encountered this before, as I’m sure many of you have. And so I’ve learned, there is one surefire cure for submission fatigue.

Remembering why I fell in love with writing.

And for me, that’s revisiting the books that changed me.

A while ago on Facebook, a friend of mine asked people to tell her which novels were the most important to them growing up. Without a second thought, my fingers dashed across the keyboard with this response:

From the Mixed-Up Files of Mrs. Basil E. Frankenweiler by E.L. Konigsburg

My Antonia by Willa Cather.

And when those titles spewed from my subconscious, I began to ponder the question, “WHY?” Why are these the books that I loved the most? Why are these the books whose names still fly off my fingertips over 20 years later? In reflecting on the impact these stories had on me, I have come to the conclusion that I love and remember them because they each changed something in me…the way that I saw myself, and the way that I saw the world.

I don’t remember exactly how old I was when I read From the Mixed-Up Files. But I was old enough to know that people viewed me a lot like they viewed the main character, Claudia. Responsible. Practical. Serious. I related to Claudia in a way that I hadn’t found in a book before. She was “straight-As Claudia Kincaid,” someone you would never expect to skip a homework assignment, much less run off to The Metropolitan Museum of Art. And yet she had something inside her that wanted adventure (a perfectly planned and comfortable one, of course), something that longed to get away from “the sameness of each and every week.” I watched Claudia…who she was on the inside, who people saw her to be, the choices she made along the way…and I realized this one truly amazing thing…

THAT I GOT TO DECIDE WHO I WANTED TO BE.

It was a revelation! Claudia did this totally crazy and unexpected thing because she was trying to break out of the wretched “sameness,” and weren’t we all living vicariously through her? Sleeping in antique beds, bathing in the fountain, choosing to eat macaroni and baked beans for breakfast, solving the mystery of Angel? Does that mean then, that I ran away, rebelled, got dreaded Bs instead of As? No. But I felt free in a way that I hadn’t before. Free to want something different, free to be smart even if it wasn’t cool, free to surprise people with what I had inside of me. 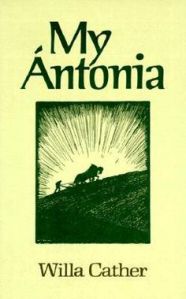 I was a sophomore in high school when I read My Antonia. I wasn’t expecting to like it.  It is set in the late 19th century. On the plains of Nebraska. And the jacketflap promises insight to the “rural immigrant experience.” Doesn’t exactly scream page-turner, especially to a 14-year old. But for me, homework that consisted of getting lost in a story was much preferred over the angles and quadrants of geometry, and so I read it gladly.

The central relationship in this book is between Jim, the narrator, and an immigrant neighbor named Antonia. When the book begins, they are only 10 and 12 years old, and the story follows them and their families, settlers in the frontier lands of Nebraska. And being teen-minded when I read it, I was just sure that it was going to be a love story, where Jim and Antonia fall in love, get married, have babies, and so on. But it wasn’t. It was a story about their relationship, yes. And it was a story filled with love. But it presented a different kind of relationship than I had ever experienced before. It was one whose foundation was kindness. It was one that was built on mutual respect in a time when both immigrants and women weren’t generally respected. My favorite chapter is near the end, when Jim comes back home after being at University and finds Antonia, and says this to her:

Do you know, Antonia, since I’ve been away, I think of you more often than of anyone else in this part of the world. I’d have liked to have you for a sweetheart, or a wife, or my mother or my sister–anything that a woman can be to a man. The idea of you is a part of my mind; you influence my likes and dislikes, all my tastes, hundreds of times when I don’t realize it. You really are a part of me.

I am showing great restraint in only sharing this much of the chapter. It is so beautiful. And it did something enormously influential in the life of a teenage girl. It redefined for me the idea of romantic love. Seeing this relationship between Jim and Antonia made me long for things of more permanence in my relationships. Crushes for me became less about cuteness and more about substance. Kindness. Respect. I met my husband in the dorms at Cal Poly. We both loved to read, and were friends for two years before we ever started dating. In one of our conversations about books (while still “just friends”), I mentioned My Antonia. Rob had never read it. The next time we hung out, I saw it in his room. He had read it. And not only had he read it, but he picked it up, turned to this very passage and said, “I think I know which chapter you love the most.” Yes, I swooned. And so My Antonia became a part of my own love story, one that 18 years later, still overflows with the kindness and respect that Willa Cather poured into her characters.

I am so grateful for these books and the significant ways that they formed me. And when I read them again, I am reminded of the impact of stories, the ways that they bring delight and revelation and change to people’s hearts. When the submission fatigue sets in, I read and I read and I read until I remember why I write. With each turn of the page, my fingers unclench a little more, until I’m able once again to push SEND.

Do you have a book that you read when you were young that changed you? Do you have other ways that you combat submission fatigue?  I would love to hear about it in the comments!

7 thoughts on “On Submission Fatigue”