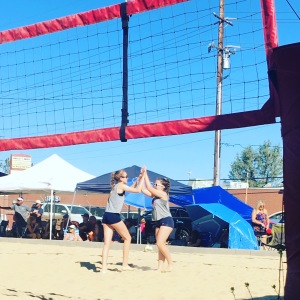 “I thought this was what I wanted, but now that I’m here, I don’t know if I can handle it!” I stared in shock at my thirteen-year-old daughter as she broke down the night before her first volleyball practice. Just a week before, we had been celebrating the fact that she made the high school volleyball team; a goal of hers since she started playing in 5th grade. In the years leading up to high school, she had dealt with many disappointments when it came to volleyball. A short girl in a sport that favors height, she had to work hard to win one of the few spots available to the vertically challenged. But now that the thing she had worked so hard for was finally in front of her, she was having a hard time stepping into it.

“I’m just so stressed!” she cried, and no matter how many different ways I tried to encourage and bolster her confidence, nothing was working. So I employed my therapist-suggested anxiety reducing question…

“What’s the worst that could happen?”

She took a deep breath and responded, “I could shank a ball, miss my serve, be in the wrong place on defense…”

“So, you could make a mistake?”

“Huh?” She looked at me quizzically, I’m sure wondering when and how Cheerleader Mom left the room.

“You WILL make a mistake. Most likely more than one. But guess what? So will everyone else. And you know what happens next? You get right back out there to try again.”

“Why? So I can make another mistake?”

“Maybe. But at least you give yourself the opportunity to get it exactly right.”

Now this is the point where my teenage daughter dried her tears, jumped up from her bed, hugged me, told me I was the wisest person she’d ever known, and confidently marched into that volleyball practice, right?

Um, no. She rolled over in bed and said, “I think I’ll go to sleep now,” which in teenager-speak is about as close to that above dream scenario as I’ll get.

Why is it that we are so afraid of making mistakes?

True Story: When I was young, I never liked writing because I felt better when I knew for certain that I had the RIGHT ANSWER. Math was so simple. It was definitively either right or wrong. In the horrific instance that I did make a mistake, I could figure out exactly how to fix it. And it could be done quietly, secretly, on the page in front of me. Only paper and pencil with the knowledge of my error.

Writing, on the other hand, is so subjective. How do I know if I’ve done it right? First, I write it and I hate it. It’s wrong. Then I edit and I like it, at least a little. A critique partner reads and loves it. It’s perfect! (oh, the blessed thought of perfection!) Another reads and comes back with notes. So many notes. This character feels one-dimensional. This story arc is missing some beats. This point of view isn’t working. ACK! It’s wrong, it’s wrong!

And if the fear of mistakes in writing isn’t enough, enter the frustratingly imprecise business of submitting our work for publication.

These are all valid questions, and I’m not saying that we shouldn’t ask them, or that we shouldn’t strive for excellence in our writing (or volleyball!) lives. But I am saying that when we have so much anxiety about making mistakes that we can’t step into the thing that we’ve been working so hard for even when it’s right in front of us? Then we have more work to do. And I don’t mean on our manuscript or on our jump serve. The work is internal, and it’s about battling the need to be perfect. I always find myself coming back to this quote by Anne Lamott, and if you’ve been here for a while, you’ve probably heard me quote her before:

““Perfectionism is the voice of the oppressor, the enemy of the people. It will keep you cramped and insane your whole life… I think perfectionism is based on the obsessive belief that if you run carefully enough, hitting each stepping-stone just right, you won’t have to die. The truth is that you will die anyway and that a lot of people who aren’t even looking at their feet are going to do a whole lot better than you, and have a lot more fun while they’re doing it.”

The good news is that it is possible to release that anxiety. To give up trying to control every little detail. To run with abandon. To have some fun along the way.

But what if I make a mistake?

You WILL make a mistake. Most likely more than one. But guess what? So will everyone else. And you know what happens next? You get right back out there to try again.

Why? So I can make another mistake?

Maybe. But at least you give yourself the opportunity to get it exactly right.

5 thoughts on “On Making Mistakes”