Part Two of the series BUT ARE YOU A MATCH? (prt 1 here) could also be called:

Because different agents have different ideas about what his/her role is as your representative. Some do it all, and some have a very narrow range of what they want from you.

So let us consider:

THIS BOOK–Obviously, the agent wants to shop the manuscript that made her pick up the phone. Is this the only manuscript she cares about, while you have a dozen more in the offing? Is he/she ready to commit to you right then and there, but you want to flit from flower to flower, unfettered? Then perhaps you’re not a match.

But if the agent wants an ongoing relationship and you want a guide through the publishing waters, or if he/she only cares about one book–and you do too, then snap him/her up.

THIS GENRE–Perhaps the agent is clutching your non-fiction middle-grade manuscript to his/her heaving chest, but you write middle grade novels, too. Will this agent sell only your non-fiction pieces, when you want him/her to handle your novels, also? Or do you want two separate specialist agents, when this guy/gal wants to handle all the middle-grade genres you can crank out. No matches, here.

EVERYTHING YOU WRITE IS GENIUS–You queried a YA Vampire Western Dystopia, which the agent loves like his/her own mother, but you also write picture books. The agent doesn’t know a picture book from a hole in…the ground, but you want a one-stop agent who will find a publisher for anything you write, including a grocery list. Matching? Um, no.

But if the agent wants to collaborate on more than one book or one genre, if he/she wants to partner with you in building a career, than Eureka!

PRE-REJECTION–Say you’ve written something that falls inside the agent’s previously agreed-upon purview. But they don’t like it. I’m not talking about a manuscript that needs work before it goes out, this hypothetical book is polished to a blinding sheen. But it’s just not this agent’s cup of frappuccino. Does he/she reserve the right to refuse to represent your manuscript, or does he/she pull up his/her big boy/girl panties and get to work? You’d be surprised how often this happens.

There’s no but to this one. Asking an agent to sell a manuscript that he/she doesn’t believe in might be a waste of time for everyone involved. But an agent who rejects solid manuscript after solid manuscript seems lazy. Like they want a guarantee of success before they’ll type an email.

A good agent will tell you the truth–you don’t want him/her to go out with a crappy manuscript with your name on it–but also be open-minded enough to go outside his/her comfort zone and SELL YOUR BOOK. 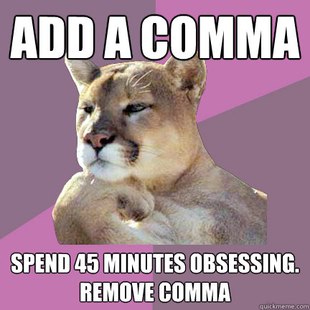 11 thoughts on “But Are You a Match? Six Things to Consider Before Accepting Representation: Prt 2/6–WHAT ARE THEY INTERESTED IN?”