Seven years ago, when I finished my first attempt at contemporary middle-grade fiction, I wasn’t quite sure what to do with it. Submit to agents? Submit it myself to those houses who would allow unsolicited manuscripts? I’d already been collecting rejections from my first two attempted novels (both historical fiction – and both still unpublished.)

I decided to try something different. I entered The Beef Princess of Practical County in a major publisher’s contest for unpublished authors. I didn’t win. So, I entered it in another: the Delacorte Dell (Random House) Middle Grade Fiction Contest.  Again, I didn’t win. No one did, actually. It was one of the years they didn’t choose a winner. But shortly after, I got a call saying I was a finalist. And, would I be willing to do some work on the novel and resubmit it?  Uh, sure!  So, Beef Princess was sold to a Random House imprint without an agent on a second try. Not your typical “how I got published” story, I’ll admit.

The Beef Princess of Practical County won a 2010 International Reading Association Children’s Book Award for Intermediate Fiction. It was Nebraska Farm Bureau’s Children’s Agricultural Book of the Year in 2011. Sales were in the tens of thousands. So, it enjoyed reasonable success, right?

Soon, Beef Princess fans began asking for more. (But my editor didn’t.) Young readers said, “You should write another Practical County story!” (Hmm, my editor didn’t.)  School teachers said, “Frannie surely has her own tale to tell!” (But my editor wasn’t asking for Frannie’s tale.) So, I wrote it. And much to my shock and chagrin, guess who wasn’t all that interested? You got it. Random House was not going to publish the sequel. (I know, I know. I’m not the sharpest tool in the shed sometimes.)

When I finished a third contemporary middle grade novel (NOT a third Practical County story. I’m stubborn, but not that stubborn!) I decided to try the agent route. I was lucky to land an agent who loved my book about Danish gnomes at Christmastime! She sold it within six months to Candlewick Press, a publisher I would have never had access to without an agent. (That is Winterfrost, due to release September 9, 2014.) 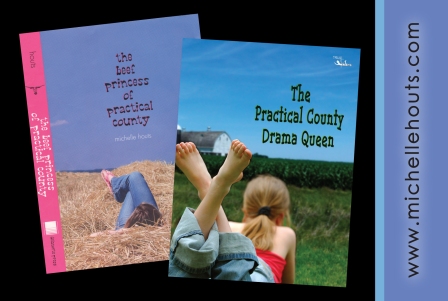 But what about that sequel?  Long story, short version: It was a hard sell. No one wanted the sequel to something they hadn’t published. Finally, my agent submitted to MuseItUp, a small Canadian publisher, and they offered an electronic AND print contract right away. Frannie’s tale would be told! The Practical County Drama Queen was released January 31, 2014 in electronic formats. In the spring, it will be released in paperback.

So, what’s the difference between publishing with an agent and without? My answers would be: Focus and Time

Focus. Subbing on my own meant I was taking lots of shots in the dark. I was choosing editors based on what I could find about their tastes online. I was going on hearsay and sometimes that backfires. My rural roots come through in much of my writing, and I once got a form rejection letter with a hand-written message on the bottom: I have a pet peeve about farm stories. Good luck. A good agent would have never sent my story to that editor. But I had no way of knowing that.

Time. Editors get back to agents within weeks. (Usually. Many editors afford agents due respect and respond as quickly as they can. I’m still a little shocked when editors don’t reply at all to my agent.  In my humble opinion, she deserves at least a reply. She is, after all, working to send editors manuscripts she thinks they’ll love.) But editors get back to authors – especially those of us in the unsolicited slush pile – within months, or not at all. I once got a rejection letter in November and I almost couldn’t remember sending the submission, dated September. Just two months, right? No. A closer look revealed I had sent it in September of the previous year. Fourteen months! That’s my record. Of course, most houses have gone to the “if you don’t hear from us in __ months, consider it a rejection” policy.

So, I’ve experienced publishing with and without an agent. One of my titles would have never sold to its publisher without her involvement. The other, I could have likely gotten into on my own. But, in the end, it was a combination of factors that helped each book find its publishing home.

It’s so great to be able to learn what goes on ‘behind the scenes.’ Thank you Michelle for sharing with us! To learn more about Michelle Houts and her writing journey, visit www.michellehouts.com.

7 thoughts on “Publishing a Children’s Book: With and Without an Agent by Michelle Houts”